Several families leave Missouri in 1844, heading west to California through the Sierra Nevada. But along the way, a winter storm forces them to separate into different groups.  As they each face their own struggles by either waiting for rescue or journeying on, they are pushed to the limits of what they can handle.  They must rely on faith to carry them through the toughest of winters and circumstances.

This book has truly heart touching stories of trials and survival in the harsh conditions of 1844. The author does such a good job with her research, which shows in her exquisite details, and paints scenes that allow you to really envision the primitive and wild west.  I would classify this story as heavy on historical content.  The characters discover what is truly important in life and the lessons they learned along the way are lessons that modern readers can even use to apply to their own lives today.  Although this book is fiction, it gives a glimpse into what could have transpired during such a difficult time.  I liked this book, but would definitely categorize it as a heavier novel, and recommend it to those who like historical fiction.

I received a complimentary copy of this book from Revell Publishing.  Opinions expressed in this review are entirely my own.

Carrie Strahorn marries an adventurer, somewhat expecting but never truly imagining that their lives would be spent exploring a greater part of the West and writing articles to people in the East to encourage them to populate the wilder part of America in the late nineteenth century.  She initially finds the moving about frequently exciting but soon her heart desires something more—a permanent home and family.  Feeling alone in her thoughts, she turns to journaling to express her feelings.  And as she writes, she discovers more about herself.

This book gives readers an interesting and unique perspective into the life of a pioneer lady at the turn of the twentieth century as she explores the Wild West with her husband. It is set up almost like a memoir within a memoir and expresses her deepest desires among the pages.  The novel is an excellent story of history, full of details that are interesting and thought provoking.  I very much liked Carrie and found myself connecting with her. I thought the chapters felt detached from each other.  I did not find an overarching plot or theme but rather felt as if I was reading a historical journal.  However, it is well written and if readers like novels heavy in history, this is for you! 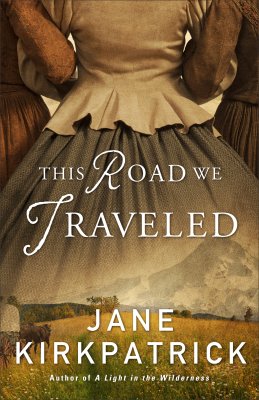 Tabitha Brown wishes to join her family on their quest out west on the Oregon Trail. But her son thinks she will only be a burden to the group. Her daughter, Pherne, on the other hand, desires to remain at her beloved home and the grave of her dear son rather than venture into the unknown. Pherne suspects, however, that her daughter, Virgilia, is excited to transverse the Oregon Trail into a new world out west. As the three women begin a new journey, they will discover new courage and grow in their faith, despite the many trials that meet them on the trail.

Jane Kirkpatrick does a great job researching historical details and incorporating them into a readable storyline. It was interesting to read about the hardships of the Oregon Trail from the perspectives of three different individuals, even across several generations. It was easy to visualize the scenes and settings. I thought that sometimes the historical details overshadowed the depth of the characters and hindered my ability to connect with them on a richer level. Nevertheless, this story is recommended to those who enjoy historical fiction.

Eliza Spalding Warren struggles with feelings of displacement after her captivity by the Cayuse Indians during a massacre in 1847 and the death of her mother a few years later. Wanting to find love and acceptance, she impulsively makes a decision that forever changes her family dynamic. But this choice has consequences. Now she is facing a move back to the territory where she spent her captivity. Desperate for comfort, she finds her mother’s diary in the attic and spends time reading of her mother’s struggles in a new land, surprised to find similarities in their circumstances. As Eliza learns to trust and grow despite her surroundings, she finds peace and healing in her past and her future.

This novel is full of interesting history. It is especially fascinating because the author based much of the facts on real events. I appreciated the author’s ability to tell the story without romanticizing the plot in any way, making it as realistic as possible. One part of the novel that made the plot a little choppier was the chapters of Eliza’s mother’s diary interspersed among Eliza’s story, despite the fact that it was interesting to read about the parallels in both of their lives. Overall, I really liked the characters, especially Eliza. I also enjoyed the author’s writing style, which flowed well. The story moves quickly as it occurs over many years, but the development of the characters does not make this feel rushed. A novel recommended for its great historical depth!

Letitia, an African American woman in the Southern United States during the mid 1800’s, knows that the free papers given to her by a previous owner are priceless, but she realizes they do little to encourage whites to treat her as an equal. Yet Davey Carson, an Irish immigrant, is kind towards her and gradually earns her trust. She soon finds herself traveling west with him in hopes of building a new life, one in which she can make decisions for herself, perhaps even own a bit of property. While preparing for the journey, Letitia meets generous Nancy Hawkins, a white woman who looks beyond the color of Letitia’s skin to her strong and courageous soul. The two women bond together as they struggle to overcome a great many trials during their crossing west. Upon arriving, they befriend an elderly native Kalapuya Indian named Besty, who offers to help her new friends settle into the foreign land. All three women possess spirits that grow stronger in the face of adversity as they carve out lives in a land and a culture not accepting or forgiving towards some.

A Light in the Wilderness, according to the author’s detailed post note, is based on a true story. The extensive historical research collected during Ms. Kirkpatrick’s writing is a testament to the raw, authentic plotline. Although this book may be difficult to absorb due to some of its grim material, Ms. Kirkpatrick is to be applauded for telling a story that has trials but weaves in a message of hope and justice. The characters have true courage in the midst of real adversity and their inner strength shines through the pages more than once. A few plot points jump without proper explanation and a bit more detail may have allowed the story to flow better. However, the accounts and journey of these strong women is interesting and worth learning. This novel is recommended for those who enjoy history and wish to read how the events transpired without having the less satisfying portions of history glossed over or ignored. 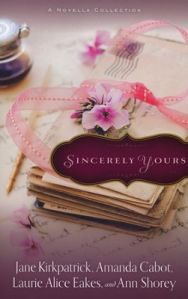 Sincerely Yours is a novella collection of four short stories in which four young women find their lives changed after receiving a letter signed with the valediction, “sincerely yours.”  This common theme ties the four stories together nicely, despite the very different time periods and plots.  The new paths of each woman entail exciting adventures among rivers, drawing rooms, inns, and hospitals and will perhaps even lead to everlasting love.

Camilla Renfrew responds to a letter from a friend who offers protection after a false accusation leaves her running from the law.  She finds herself drawn to the mysterious captain of a steamboat bound for her destination.  The setting of the first story is interesting and the dangers involved for both characters make the plot exciting.  However, the flow of this novella is a little choppy and forced, pushing the characters toward each other in an awkward fashion.  Although not uncommon for a novella, the ending was a bit too neat and unrealistic.

Lessons in Love by Ann Shorey

Marigold Montgomery Bentley uses her initials when writing articles for a popular magazine, causing everyone to assume she is a man.  However, when the editor writes her a letter asking to meet, M. M. Bentley finds herself desperately trying to continue the rouse to save her writing career.  This is the most well-written and enjoyable of the four novellas.  The characters are likable and the plot is entertaining even as it gives its readers a glimpse into women’s roles in the late nineteenth century.  As is the case with most novellas, the romance is quick and tidy, but the inward strength of the characters and their complimentary life goals makes their love believable and sweet.

One Little Word by Amanda Cabot

Lorraine Caldwell receives a letter from her brother for the first time in several years and the note of pleading in his tone causes her to join him at the remote and beautiful Lilac Inn.  Instead of spending a short time with her brother as intended, Lorraine instead discovers she is attracted to the mystifying carousel carver and thus extends her stay as she discerns what matters most in life.  This particular novella is fascinating as it details the unique process of creating a carousel.  The descriptions allow the reader to visualize the beautiful colors and hard work involved in the creation of the carousel.  The love between the characters develops quickly and the ending is rather unrealistic in its neatness, but the short story is enjoyable.

A Saving Grace by Jane Kirkpatrick

Grace Hathaway travels to save her friend from a remote and mysterious hospital after the woman’s young daughter sends a letter begging Grace for help.  Upon her arrival, Grace discovers the hospital promises rapid healing but instead only serves to harm the patients; she thus seeks the help of a doctor who has a secret of his own.  Although this novella at first seems mysterious and exciting, it quickly becomes almost creepy as Grace discovers the horrible practices used to “cure” the patients.  The plot is not enjoyable and the horrifying conditions and physiological mind games of the hospital do not create a pleasant scene for romance.  This short story could stand alone as the tone was so different from the lighthearted and sweet storylines of the first three novellas. (This author is offering a giveaway! See the details here: http://janeswordsofencouragement.blogspot.com/)

Nail bitting suspense by an author who does it so well! @lynetteeason #CollateralDamage #DangerNeverSleepsSeries @revellbooks
Another lovely book by the talented @roseannamwhite with an intriguing plot, fascinating history, and passionate romance! #OnWingsofDevotion #TheCodebreakers @bethanyhousefiction
Another absolutely awesome read by @jaimejowright! Full of mystery with complex characters and the perfect split time plot I’ve come to anticipate from this author! Review is up on the blog! #EchoesAmongTheStones @bethanyhousefiction https://lifeofliterature.wordpress.com/2019/12/03/echoes-among-the-stones-by-jaime-jo-wright/